We Stayed Married Throughout Our Kitchen Remodel

You guys!!!! This post has been a long time coming, I mean really, A LONG time. My new kitchen has been functional and pretty much done for over a year, I say pretty much done because it’s still not decorated the way I want it (think stools, rugs, books, amazing things the kids won’t ruin….) but if I wait until it’s “finished” I would never post it.  If you want to hear the journey my kitchen has been through, keep reading, if you are in a hurry and only came to see the pics…then simply scroll through.

Ricky and I bought our house not quite sixteen years ago (can you believe we will be married seventeen years this summer?!!) and it needed some work….ok, it needed a lot. We were just excited to be home owners and knew that each experience remodeling parts of the home would be well worth it. Since kitchens cost so much money to remodel, it took some time to get to it. This is what it looked like when we bought it. I mean..look at all of those patterns!! Whew, it really almost makes me vomit. It was small and had almost no cabinets. The stove was across the room, making cooking dinner a pain. We lived with it this way for a few years until I spilled an entire bottle of bright pink penicillin on the carpet…and a gallon of chocolate milk…then, it was definitely time to get a face lift. I’m pretty sure I started pulling up the carpet one day while Ricky was at work, then we had no choice but to keep going, lol. I didn’t get pics of what the first remodel looked like before we tore down a wall, but you can get the idea. We didn’t improve the kitchen too much, but we added a cheap laminate floor and laminate countertop to pacify me for awhile. I painted the paneling on the walls and still hated my kitchen, but at least there was no more carpet!! Oh and check out the stained ceiling panels…yummy. This was where we took out a little wall. You see that chimney behind there? Well, my husband was adamant that it was not coming down (way too much work!!) So, like a good wife, I stood beside him in the kitchen every day as we silently looked at the space and tried to figure out the best floor plan (most people would have a plan before gutting the kitchen…but not us!) until one day he made up his mind that the chimney had to come down for us to maximize space……Eureka!!! It just had to be his idea. So on memorial day weekend, Ricky, his brother Joe, and I were on the roof throwing bricks into a dumpster…and eventually the entire chimney was out (all the way down to the basement!! Of course there was a huge hole in my boy’s room now, but we took care of that later). Once the chimney was out, I was able to come up with a plan. I say me, but what I really mean is about four kitchen cabinet places. After months of going back and forth, we decided to go with Zach at Grabill Cabinets (he’s the best!). I knew I didn’t want any space above my cabinets, so unfortunately for my wallet, we went custom. Ricky is handy, so he did all the prep work and tiling which saved us some money….hallelujah! For the tile (which took me another four months to pick out…no joke…this was the most stressful thing in our marriage. I couldn’t make decisions and it caused a bit of tension. At least we only raised our voices once….possibly twice) we ended up going with porcelain tile from Italy. Yes….stinking Italy….I apparently thought I was made of money (no worries, we landed a deal at Jack Laurie for half the price another place was going to charge us, score!!) It’s one of my favorite parts of the kitchen. It has gray and browns that run through it, I really do love it. Then, for the backsplash, we ended up going with a marble tile from Eagle Tile. Sometimes I regret spending so much money on our remodel, but then I stand in it and change my mind. It totally calms me, and I’m so grateful we were able to do it. Of course there are many more things we’d like to change about our house, because let’s be honest, it’s not our dream home, but it’s certainly a home we dream in and that’s all that matters. I could go on forever about all of the remodeling process…but I think you are ready to see the pics right?!  And before you say, “Oh, another white kitchen….” Let me just say, I love me a nice dark stain, but my kitchen is still relatively small and I knew I wanted it to be bright…..and bright it is. I went with a dark wall and floor to ground it and I’m slowly working on adding in colors through decor…Enjoy! 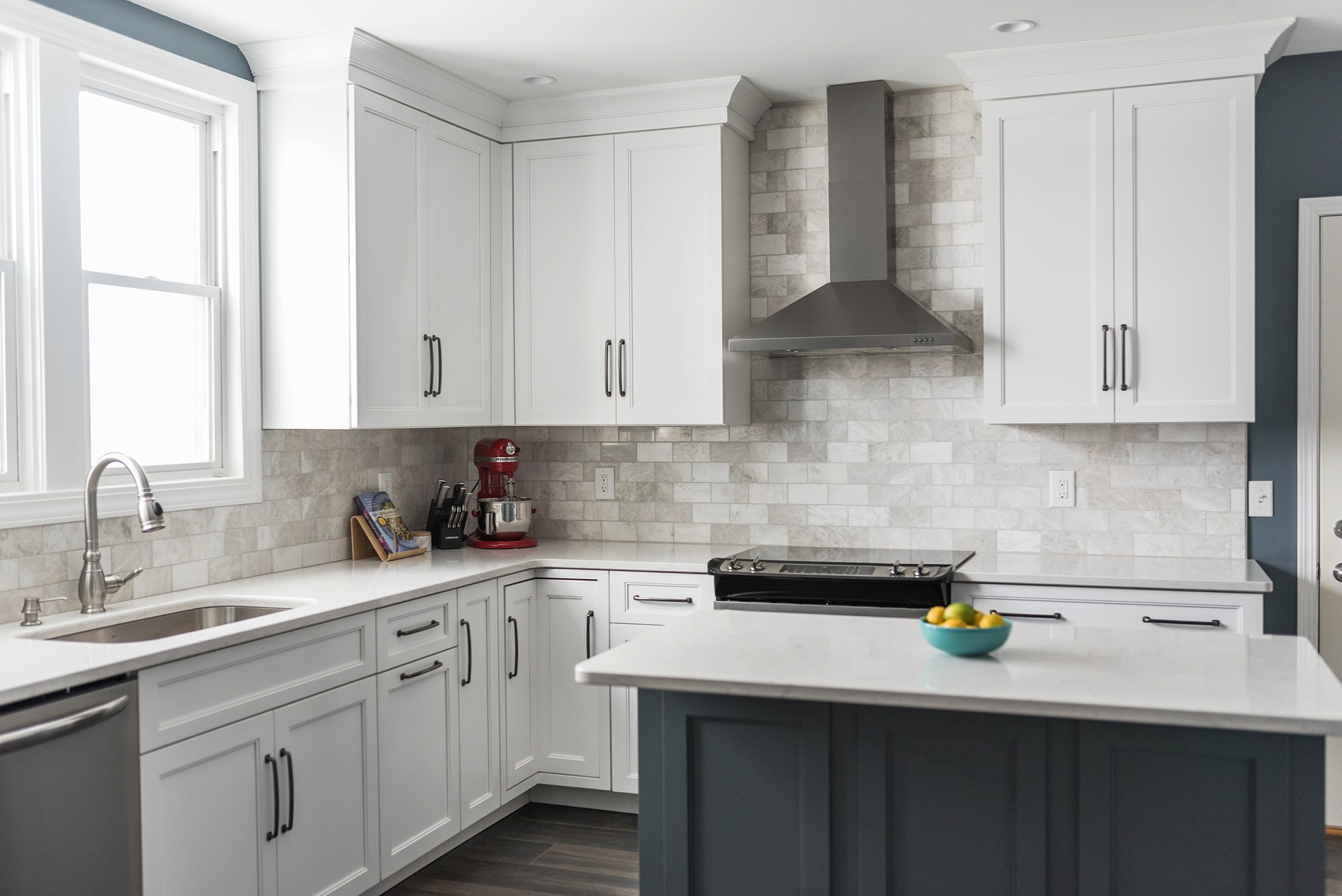 1 Comment on We Stayed Married Throughout Our Kitchen Remodel